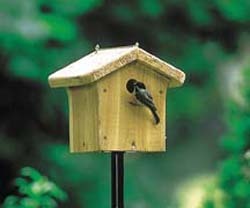 GENERAL
- A bird's primary consideration when choosing a nesting site is security. Protection from predators and proximity to food is of vital importance to the success of a bird's offspring.
- Abundant and easily obtained sources of food allow for more time to be devoted to better nest site selection and construction of higher quality nests, along with more time and energy to be vigilant in defense of the nesting territory from interlopers and predators.
- A study published in the England’s Royal Society journal Biology Letters found that birds with winter access to the extra nutrition that feeders provide will lay their clutch of eggs earlier and fledge an average of one more chick per clutch than do their counterparts with no access to feeders.

CHICKADEE
- Chickadees are cavity nesters. They will excavate their own nest site in a rotten or decaying wood, use an old woodpecker hole or use a nesting box. They add a cozy nest on a moss base.
- Mountain Chickadees may excavate a cavity as well in very loose wood. They will also nest under rock crevices in a bank or in a hole in the ground. They add a cozy lining of fur to the nest.

BUSHTITS
- The one-foot-long hanging nest of a Bushtit resembles an Oriole’s nest and is woven out of a variety of materials including mosses, lichens, leaves and spider's webs.

WRENS
- The Cactus Wren builds an elaborate gourd-shaped nest in about ten days, and may fuss with improvements for another several weeks.
- A male House Wren may lay claim to a nesting cavity by filling it with more than 400 small twigs. If the female likes what she sees, she will then take over, adding the nest cup and lining it with grass, inner bark, hair, and feathers. Be sure to check your nest boxes.
- A single male Carolina Wren can sing up to forty different songs – up to 3,000 times in a single day.
- A female Carolina Wren is unable to defend her territory alone if her mate dies, so she spends much of her time watching for predators as they forage together.
- A pair bond may form between a male and a female Carolina Wren at any time of the year, and the pair will stay together for life. Members of a pair stay together on their territory year-round and forage and move around the territory together

ROBINS
- Robins usually return to the same area to nest each year and may occasionally use last year’s nest again after some renovation.
- The American Robin will use mud in its nest to give it strength. You can put out a small pan of mud and nesting materials (short strings, yarn, dry grasses) and watch the robins come collect materials to make their nests.
- Unlike most birds, robins do not lay their eggs at sunrise. They lay their eggs several hours later during the mid-morning. Since earthworms are easier to find in the early morning, they feed first thing in the morning and then return to their nest to lay their egg.

DOVES
- Mourning Doves’ nests are sticks woven together by the female with materials collected by the male.
- Mourning Doves may have up to six clutches per year with a typical clutch size of two eggs. This prolific number of nesting cycles is the largest of any North American bird.
- Both Mourning Dove parents feed their young on “crop milk,” a yogurt-like secretion produced by the walls of their crop. It takes both parents to provide enough food for the growing nestlings. If one parent is lost during the nestlings’ first seven days, the young will not be able to survive on the food produced by the lone remaining adult.

HOUSE FINCH
- Both male and female House Finches display a strong tendency to return to the same area to breed, often occupying the same nest site as the previous year.
- Ironically, House Finches rarely use bird houses to build their nest in; instead they seem to prefer locations such as coniferous trees, cactus plants, ledges, street lamps, ivy on building and hanging planters. You can also attract them with a water source for drinking and bathing.

HUMMINGBIRDS
- Hummingbirds use spider webs as glue to attach the nest to a tree branch as well as a binding agent for the building materials.
- The nest is about the size of a golf ball; around 1 ½ inches in diameter.

GOLDFINCHES
- The American Goldfinch is one of the latest breeding songbirds, waiting to nest until mid-to-late summer when thistle seeds and down are readily available.
- Like their cousin the American Goldfinch, Lesser Goldfinches will delay breeding until the greatest number of thistle, dandelion and other composite flowers are seeding. This occurs in some regions in the spring while others in late summer.
- American Goldfinches prefer to nest in habitats with trees and shrubs and usually place their nest four to ten feet high, often near a water source (such as a bird bath).

CARDINALS
- During the breeding season, male cardinals may sing 200 or more songs per hour in the early morning hours. He will defend a breeding territory ranging from two to ten acres. Watch how busy he is once his mate on the nest as he will provide her food and protect the nest.
- Young Northern Cardinals have black bills rather than the orange-red of the adults. It gradually changes to the adult color three to four months after hatching.

ORIOLES
- The Oriole nest is an engineering masterpiece. The female weaves a hanging-basket nest with plant fibers, grasses, vine and tree bark and sometimes string or yarn placed out on the small twigs of a branch 6-45 feet in the air. This keeps them safe from most predators.
- It takes as many as 12 days for an Oriole to weave its nest. One Baltimore Oriole was observed spending 40 hours building a nest with about 10,000 stitches and the tying of thousands of knots, all with its beak.

NUTHATCHES
- The White-breasted Nuthatch is known to bill-sweep a crushed insect around their nest cavity's entrance hole. Presumably to deter predators with the chemical-defense mechanisms from the insect.
- The Red-breasted Nuthatch will line the entrance to its nesting cavity with drops of sticky conifer resin. It is thought that this may be a tactic to discourage predators or nest competitors from entering. The nuthatches avoid the resin themselves by diving directly into the cavity without ever touching the sides of the entry hole.
- Pygmy and Brown-headed Nuthatches are two of the few North America bird species known to breed cooperatively. A third of all breeding pairs of Pygmy Nuthatches have one to three male helpers, usually their own offspring or other relatives. Studies of the Brown-headed Nuthatch show that between 20-60% of breeding pairs has at least one helper. These helpers assist in feeding the incubating female, the nestlings and the young fledglings.

SONG SPARROWS
- A pair of Song Sparrows will live and nest in 1 ½ acres or fewer and may raise up to four broods a year.
- A research study showed that Song Sparrows with access to millet feeders started nesting and produced eggs up to 14 days earlier than those without access to feeders.
- Studies have shown that female Song Sparrows are attracted to males that learn and sing a larger repertoire of songs. These males are much more successful in holding their territories and reproducing.
- During the dawn twilight on a spring morning, male Song Sparrows will sing a song every eight seconds and may average over 2,300 songs during an entire day.